The cast of characters

We currently have two cats, who are essential for rodent control, six hens and one cockerel. We decided not to have any larger animals (goats, pigs, sheep or cows) because of the bureaucratic burden on anything larger than poultry. 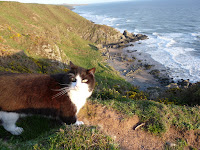 Domino aka The Guy is a real snuggle cat. He also loves dental hygiene, having people open windows for him, going for long walks to the beach and riding on shoulders (ideally while people are brushing their teeth). 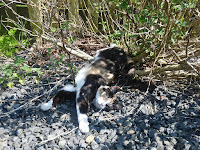 Domino's sister Poppy is a real huntress. Partridge, weasel, eating-size rabbits - she'll bring them through the cat flap or leave them on the patio. When she's not hunting or cleaning her immaculate white bits, she likes to snooze al fresco and will accept stroking. 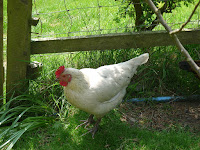 Magnolia, or Mags, is our former top hen. Like her mother Amber, she is a bolshie hen and was always first to grab tasty treats from our hands. It's beginning to look like one of her lookalikes from the next generation (Vanilla) has now grabbed the top spot on the perch. 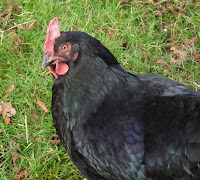 A large and beautiful black bird with a blue-green sheen. Raven is rather shy and lays chocolate brown eggs wherever she wants -  sometimes even in the nest box. She's the only one to have had her wing clipped on one side since she likes to fly over the fence to get to a secret egg stash. 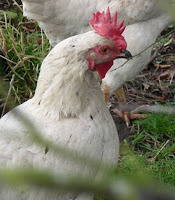 Almost identical in appearance to Magnolia, Mags2 has turned out to be just as good a layer. The bolshie temperament has passed this one by though - she's definitely bottom of the pecking order.
These off-white birds may be a bit behind in the looks department, but they are steady and reliable. 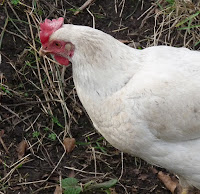 Another plain hen, Vanilla started out the smallest of last year's 'crop' but now she's grown into her large, tough personality. Looking likely to be top hen for some time to come. She really likes to chase cats. Domino would like to be her pal, but that involves a lot of ear and head pecking. 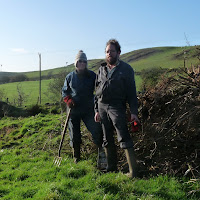 The ones who do all the hard work around here. 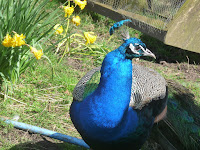 Cedric the Peacock came with the premises. A very handsome chap, he was not as pleasant to listen to as to look at. The hens also did not appreciate Cedric's repeated mating attempts and we didn't appreciate him eating our herbs and soft fruit. Luckily he was of a ripe old age and didn't survive our first summer. 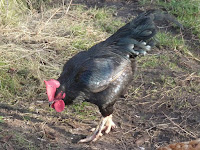 Father and grandfather to our current cohort of hens, Old Russ liked a good fight - maybe that's why they are all so feisty. When his son Soruss reached sexual maturity and started to have crowing duets with his dad, Russell was casseroled and very tasty he was too. 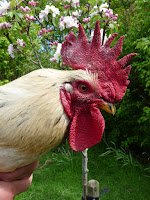 Russell's son, Soruss, was a real disciplinarian. Any hens not joining an orderly queue for a breakfast of layers' pellets had to watch out. Soruss did not like visitors, the compost caddy or the large red watering can. He did attack guests from behind, flying up into the backs of their knees, and this tendency hastened his end. He did, however, do a grand job keeping his flock together and safe in a mad colonel sort of way. 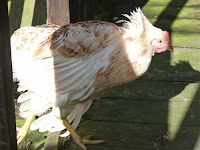 Our previous top hen and mother of Soruss and Mags, Amber might have been an engaging hen to humans, but she was very mean to the young chicks. Even when they reached maturity she was pecking them mercilessly, something which Soruss couldn't tolerate. For the harmony of the flock, Amber had to be souped.

A pretty but slightly dumb hen, Haze laid enormous eggs. Her largest weighed in at 136 grams. Three times she was egg-bound and had to be given a warm bath. Unfortunately she burned out early and stopped laying before the age of three. 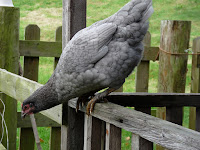 A great layer but a bit of a thug, Ash didn't tolerate anybody else in the hen house when she wanted to lay. Unfortunately, in the end, she started to eat the other hens' eggs - and there is only one cure for egg eaters. Her near-identical sister Charcoal copied Ash's egg-eating behaviour so it was two chicken soups in a row. 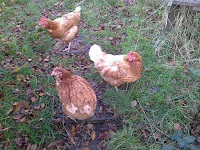 Our original five hens, ex free-range commercial layers, were already well past their best when we moved in. Two of them were killed by Mr Fox, one of them never recovered from the shock of the fox attack and the remaining two died of old age.

Comments and questions are welcome.
If you've tried something after reading about it here, or have suggestions, please tell us about it!

Get updates hot off the press: Follow by Email!